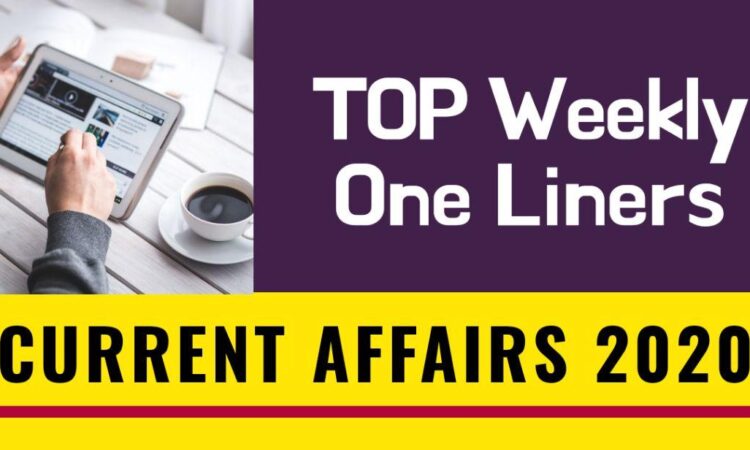 According to the list ‘World’s 50 Safest Banks 2020’, given by Global Finance, New York DBS Bank (Singapore) is the safest Bank in Asia

RBI has given approval to RBL Bank Maple II B.V. to acquire over 5% but up to 9.99% of the paid-up share capital

Kerala is the first state to Minimum Support Price (MSP)/Base Price for 16 Agricultural items which include Vegetables, Fruits and Tubers

The theme of 6th BRICS Parliamentary Forum is ‘BRICS partnership in the interest of global stability, general safety and innovative growth: Parliamentary dimension’

Rohit Sharma has been roped in as a brand ambassador of Dr Trust, healthcare firm

The 6th BRICS Parliamentary Forum was organized virtually under the chairmanship of Vyachaslav Volodin, the Chairman of Russian Parliament.

Cochin Shipyard Limited has signed a MoU with Fincantieri S.P.A. of Italy for cooperation in the areas of Design, Ship Building, Ship Repair, Marine Equipment Manufacturing and also for Training & Skill Development

The North Atlantic Treaty Organization (NATO) alliance, plans to build a headquarters for space operations at its airbase in Ramstein in Germany

The 2020 theme for The ‘Vigilance Awareness Week’ observed in India from October 27 to November 2 by Central Vigilance Commission (CVC) is Satark Bharat, Samriddh Bharat

Australia will take part in 24th edition of Malabar exercise along with India, United States (US) and Japan

Sarbpreet Singh authored the book titled “Night of the Restless Spirits: Stories from 1984”

Luis Arce has been appointed as the president of Bolivia

The new Prime Minister of Japan, Yoshihide Suga announced that the country will achieve zero carbon emissions by 2050.

2030 is target year for Sustainable Development Goal (SDG) 16 with agenda reduction in illicit arms flows is necessary for peaceful, just and inclusive societies

PM Modi has inaugurated the Paediatric Heart Hospital at Ahemadab which is India’s biggest hospital for cardiology.

Department of Posts (DOP), Ministry of Communications released a commemorative postage stamp on the 75th anniversary of the United Nations Organisations.

Wavel Ramkalawan as been elected as the President of Seychelles.

Bangladesh has launched a ‘no mask, no service’ policy in the wake of the ongoing COVID-19 pandemic across the country

Priyanka Chopra and Jr. Nandamuri Taraka Rama Rao has been appointed as the brand ambassador of the Parle Agro

The World Junior Badminton Champions 2020 which was planned to be held in New Zealand from January 11-24, 2021 has been cancelled

“The Fixer: Winning Has a Price. How Much Will You Pay?”, a book portraying the thrilling tale of Neil Upadhyay, an ex-cricketer-turned-fixer was authored by Suman Dubey

Tarang Suposhit Maharashtracha is the digital platform launched by Maharashtra government to fulfill the nutritional needs of the lactating mothers and children of the state.

Sushil Kumar Singhal, a 2000-batch IFS officer, has been concurrently accredited as the next High Commissioner of India to the Solomon Islands.

Defence Ministers of NATO Member States are planning to set up a New Space Center in Ramstein, Germany

Indian diplomat Dr. Neena Malhotra, 1992 batch Indian Foreign Service officer, has been appointed as next Ambassador to the Republic of San Marino

Tamil Nadu State Government has launched the Smart Black Board scheme in 80,000 government schools of the state

Andhra Pradesh launched the ‘YSR Bima’, to provide financial assistance to the BPL families in case of death or permanent disability of family members

A non-profit NGO has named UK-based Indian-origin plastic surgeon, Dr Jajini Varghese as  an ‘Outstanding Young Person of the World 2020’ for her “incredible” scientific contributions to diagnosing and treating breast cancer.

Lewis Hamilton has been appointed as the global ambassador of LG Electronics for its home solutions brand, LG Signature.

Uttar Pradesh has emerged as the top destination for attracting the highest number of domestic tourists visiting the state in 2019 as per the Indian Tourism Statistics (ITS) 2020,

Agar International Trade Centre, a first-of-its-kind in India was inaugurated at Assam

Rs 10,000 provided as an immediate financial aid by Andhra Pradesh government under “YSR Bima” scheme for families of accident victims

The 5th joint working group meeting on coal between India and Indonesia will be held on November 5, 2020

Ministry of Home affairs has amended Jammu and Kashmir Panchayati Raj Act, 1989 under the J&K Reorganisation Act, 2019 & provides way for creation of District Development Councils (DDCs) in each district

The 6th edition of India International Science Festival (IISF) 2020 headed by CSIR will be held virtually from 22nd to 25th December, 2020

The foundation stone for the first-ever multi-modal logistic park of India, at Jogighopa, in Bongaigaon district of Assam was laid by the Union Minister of Road Transport and Highways, Shri Nitin Gadkari

The scheme “AYUSHMAN SAHAKAR” is a unique way to assist cooperatives to play an important role in the creation of healthcare infrastructure in the country was launched by Union Agriculture Minister, Narendra Singh Tomar

The book titled “Portraits of Power: Half a Century of Being at Ringside” is authored by Nand Kishore Singh

The theme 2020 of International Chefs Day is ‘Healthy Food for the Future!’

In the Asia Power Index 2020, released by the Sydney-based Lowy Institute India has been ranked at 4th position

Patm planned to introduce 2 million co-branded credit cards, the Next Generation Credit Cards will have on touch diverse services

The 9th India-Oman Joint Commission Meeting (JCM) was held virtually, it was chaired by Minister of State for Commerce and Industries Hardeep Singh Puri

The theme 2020 of World Statistics Day is “Connecting the world with data we can trust.”

“Safe City Project” – a women’s safety campaign in Lucknow, UP was launched by Uttar Pradesh (UP) Governor, Anandiben Patel

Indian successfully test-fired the Stand-off-Anti-tank (SANT) missile off the coast of Odisha.

Aishwarya Sridhar, a 23-year-old, Mumbai based girl, became the first Indian woman to win the 2020 Wildlife Photographer of the Year award

Shashi Tharoor has authored his new book titled “The Battle of Belonging: On Nationalism, Patriotism And What It Means To Be Indian”.

The Appointments Committee of the Cabinet has approved the extension of the tenure of Home Secretary, Ajay Kumar Bhalla till 22nd August 2021

India’s ranked 28th based on expense of plate of food according to the report titled, “The Cost of a Plate of Food-2020” was released by United Nations World Food Programme (UN-WFP)

Uttar Pradesh CM Yogi Adityanath launched the ‘Mission Shakti’ programme, it will be implemented for six months till the ‘Basant Navratri’ in April 2021

The world’s biggest zinc smelter project will be set up in Dosawada in Tapi district of Gujarat.

The Book titled “On the Trails of Buddha: A Journey to the East” was penned by Deepankar Aron